2021 is the fortieth anniversary of the first UK death from Aids, and Sky has done a three part documentary series, Positive, about the UK epidemic.

The good news: it's better than It's A Sin in terms of showing the time.

The bad news: that's partly because it's '99 and 44/100%' total bisexual erasure, rather than having Russell T Davies' biphobic stereotypes.. as well as massive erasure!

Looking at the spoken word, the Ian ticksheet is as follows:

It would be much the same for the visuals, apart the way that we can see more uses of 'lesbian', mostly thanks to t-shirts and the repeated appearances of the Lesbians and Gays Support the Miners banner…

Although we get lots from Tony Whitehead, the first chair of THT, it doesn't include his comments on the early history of the organisation, given in a speech called "Gay men's health promotion – an historical overview" at the Risks Worth Taking conference ten years into the epidemic, in December 1991. Amongst much justified pride at the effects of community mobilisation being better than waiting for a homophobic government to do something, he also admitted that as a bunch of white gay men, they failed to properly serve bisexuals and Black men. The series will deal with the latter, but as you've already guessed, there's not a word on the former.

It's nice to see BBC2's Horizon programme, Killer in the Village, get its due and some film of the Heaven club as it really looked like in the 1980s. Both are in striking contrast to It's A Sin in that regard, which is a world in which the former never happened and the latter looks very different.

The series does opt out of saying why the virus that causes Aids changed name (medical plagiarism…) and the Friend phonelines wouldn't agree that London's "Gay Switchboard" was "literally the only source for all [the community's] gay needs", especially as the London one was (and still is) up the road / around a couple of corners from Switchboard.

On the plus side, Michael Cashman saying that being HIV- by the time tests arrived c1985 was a matter of luck for men on the scene is probably the best thing I have ever heard him say.

It would have been good for someone to mention that when the tests came out, THT came as close as it could to advising people not to test though.

Covering 1986 to some point in the early 90s, the Ian ticksheet is

There are also two 'fucking's and two uses of 'screwed'.

In the visual images, one of the government campaigns has the bisexual erasing and horribly binary "gay or straight".

Someone says "what causes HIV"(!) but no-one at any point mentions why the government finally got involved in HIV campaigns in a big way over five years after people in the UK started dying: the HIV sector used the scenario of bisexual men catching HIV via sex with other men and going on to infect the mainstream presumed-straight population. It was the only thing that could credibly mean that "everyone is at risk" rather than just the minority groups: gay/bisexual men, injecting drug users, and haemophiliacs. With all but the latter actively marginalised by the government, it needed the 'bisexual threat' to have them take a serious interest.

Marc Thompson is, as ever, spot on when criticising the resulting 'Aids – Don't Die of Ignorance' campaign from the perspective of anyone with HIV – what the fuck were HIV+ people supposed to do as a result of it? One of the things that the 'not mentioned anywhere in this' Gay Men Fighting Aids did from their creation in 1992 in planning their campaigns was involve HIV+ people, and it's screamingly clear that this either didn't happen with the official campaign or they weren't listened to.

He's also completely right about the long-term financial implications for gay and bisexual men: with mortgages extremely difficult to obtain because of life insurers penalising or refusing to cover anyone who even tested for HIV, it means that lots of us never 'got on the housing ladder' at a time when house prices were not completely obscene in London and elsewhere.

The version of the Norman Fowler oral sex story I believe is not that he didn't know what it was, but that he asked officials and advisers "how many people do that?" and they weren't sure if he had never done it or if he wondered if he and his wife were the only ones…

The London Lighthouse was also often used by the London Bisexual Helpline for its regular meetings – the cafe and the beanbags in the meeting rooms were lovely. When combination therapy cut the number of people dying dramatically – oops, spoiler for the final part 🙂 – the top of the Lighthouse building was sold off for housing, and several staircases in the remaining bits just ended going up to a ceiling.

Lighthouse merged with THT in 2000 (I'm trying to remember who ended up having the former morgue as their office – was it Estates?) and the building was sold off by THT in 2015. It's now the Museum of Brands…

Covering 1996 to date, the Ian ticksheet is

The reason that the bisexual erasure in the series isn't 100% is that we're told that Jay Hawkridge's mum, when he came out to her as a teenager with "I think I like boys", said..

I mean, yes, you can go 'that's a bit binary', and yes we are never told if she identifies as lesbian or bisexual[1]It's not 'I like girls too' / '.. as well as boys', in his retelling anyway. or not, but it is the only time anyone in the entire series comes anywhere near saying "bisexual".

The mention and footage of London's Pride event in 1997 fails utterly to say that it was 'Lesbian, Gay, Bisexual and Transgender Pride' – annoyingly, the main banner shown for that year's event didn't include those words in the way it did for the first officially inclusive Pride in London the previous year or in the 'Pride not profit' protest the following year.[2]The bunch who announced they were going to run the Pride event in 1998 .. oh without a bisexual tent and oh making themselves a pile of money .. following the financial crisis that saw the end of the … Continue reading Had it done so, I think that would have been the only time we see the written B-word.

Interestingly, the figure of 105,200 people in the UK with HIV in 2021 compares with the forecasts made in 2004 of 100,000 by around 2009. As the 2004 figure was around 50,000, that represented a doubling of the numbers in five years. The remarkable results of combination therapy and 'U=U' get a mention, but some of that greatly reduced rate of increase is down to other forms of health promotion that don't really get a mention. That there was community-based health promotion is covered, but apart from the things like the advice not to have sex with Americans, there's almost nothing about the content and the arguments about it.

There's a second mention of English National Opera in the series. Now, I have loved going to ENO since 1981, but that's two more mentions in a series about HIV/Aids in the UK than 'bisexual' gets.

It is worth watching. I had fun looking for myself in the images of various things I'd been at (not spotted, but some shots are deliberately blurred) and it was lovely to see several people in particular be featured. It was also interesting seeing who isn't in it, despite there being lots of contemporary footage of them and their still being around. I wonder if they declined or weren't asked. 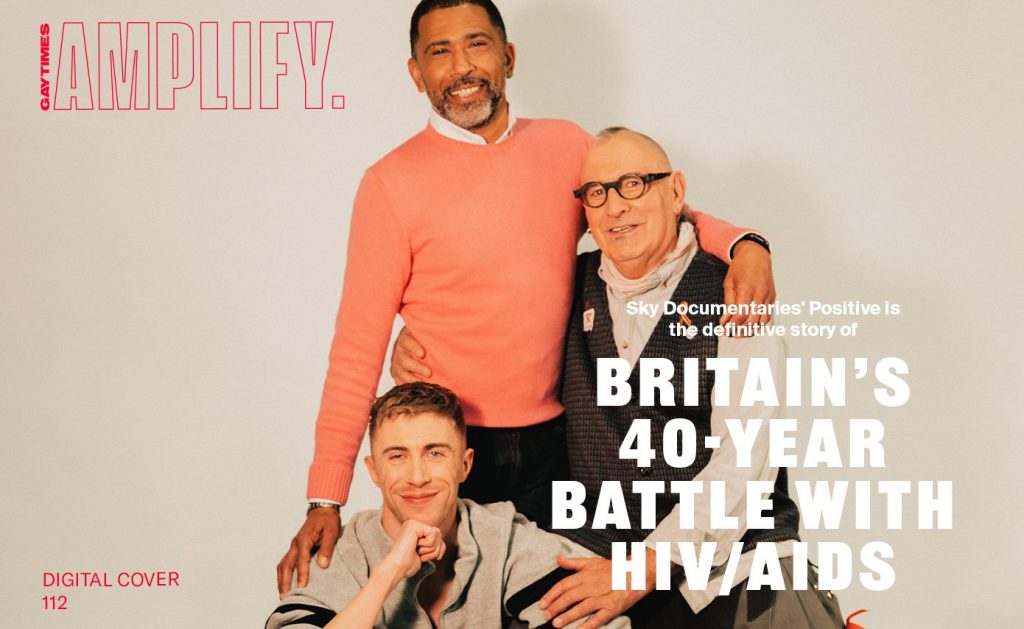 No it fucking isn't.

Even the article doesn't say 'bisexual' once.

Ironically, it does include Marc saying "When we look at the historical telling of HIV, some of the communities have been missed out.." Too right, Marc, too right.

It is not as if there's a shortage of things that could be included: I've found the date of one of the Channel 4 News programmes that was part of their campaign to get the ex-girlfriend of a bisexual man onto the then new treatment of AZT. Both had Aids and AZT was literally the only drug thought to have any effect on it, but biphobia meant that only she got the backing of one of the UK's two serious news programmes.

Similarly, there's the response of readers of Cosmopolitan magazine in their 1988 'singles survey', plus the editor's thoughts: "Did anything about the results shock her? '.. the fact that 25 per cent of women would sleep with a bisexual man, if he was special'".

Instead, we get not a word.